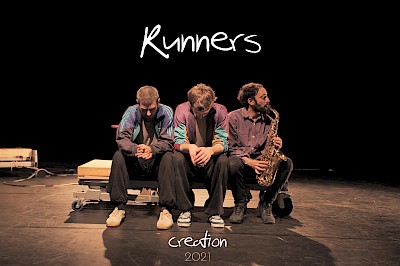 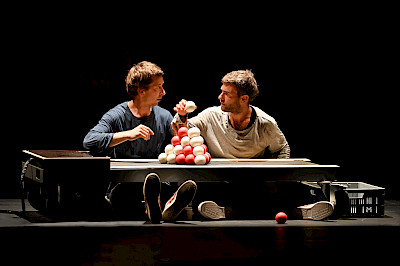 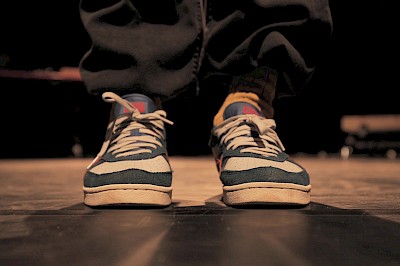 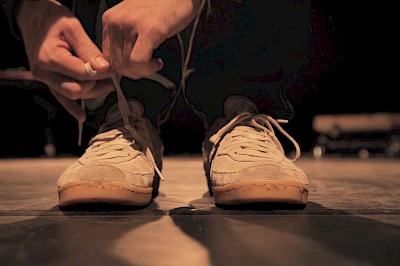 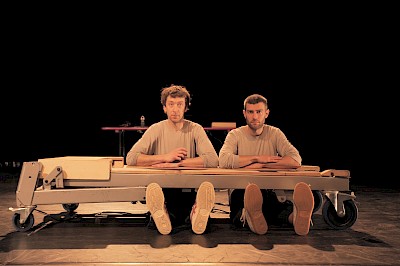 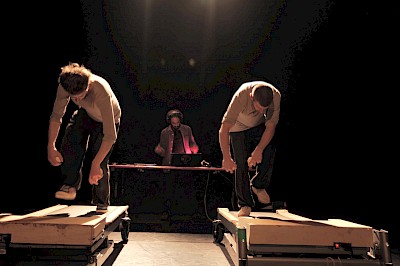 2 jugglers find themselves bound to the rules of running machines while a musician orchestrates them through a series of games and experiments. A vivid circus performance celebrating juggling and running.

Running in itself is an incredibly efficient form of human locomotion. Have you ever thought about how many muscles are needed to run, how many nerve pathways between head and leg are used with every jump? What this means in terms of coordination that the body performs - for something that seems to happen automatically? Just watch Maradona score a goal in the world cup final or feel the exhaustion of a Maratohn runner when crossing the finish line. The run has so many emotions: It has stress and it has survival, it has adrenaline, desire, fear, whether you are being chased or chasing or escaping.

Juggling is a similar phenomenon. Throwing and catching are also complex biomechanical processes. To celebrate the evolution of the human walk and throw in an increasingly immobile culture, we created RUNNERS: A circus show combining excellent juggling, stunning objects and incredible sounds.

Running machines on stage widen the perception and experience of speed, both of running and juggling. Because what happens below and what the legs do are naturally reflected in the upper part of the body. At the same time, you don't get anywhere because you're walking on the spot. This means that logic turns around, the ground beneath us moves and we can't help but respond.

The two characters Alex and Jonas find themselves bound to the rules of these objects and are guided through a series of games and experiments orchestrated by the third character Moises.

Let’s have a party and celebrate together!

The company Hippana.Maleta has been formed in 2018 using juggling, manipulation and the body as a base to construct languages in which they can explore aspects of human condition. Alex Allison (IE), Jonas Schiffauer (DE) and Moisés Mas García (ES) explore and share their vision of circus, poetry and performance.